Legend Suspension Sale use Legend-Suspension-Promo & save $124.95 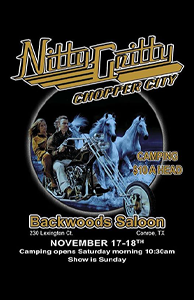 The event Nitty Gritty Chopper City is a celebration of all things chopper. This was it’s third year, the first two events were at a bar in Houston called, “Bimbos” and this year it took place at the Backwoods Saloon in Conroe, Texas just outside of Houston.

This event started at the saloon on Saturday afternoon for those of us who wished to camp. $10 got you a camp spot and a wrist band to the event. I arrived there around 1:30 PM, I had stayed in Austin, Texas the night before my ride in was about 171 miles. I was coming in for the event solo from Phoenix, AZ to represent Lane Splitters Garage. Our garage was the tee shirt of the month club for the month of November. I had also never met Danger Dan of MC shop tee’s and Danger Dan in the Talk Shop who also did a podcast with myself at Miguel the owner of Lane Splitters. A couple of people off instagram were nice enough to reach out to myself and say “hey lets hang and ride” cause they knew I was lone wolfing it that weekend- as I often do.@thethresholdexperience and @jason_fxbb were very kind and I knew we would be arriving around the same time on Saturday afternoon.

The camp space was next to an alligator pond or an alligator farm, I heard both but never saw any “gators” luckily. When I arrived and payed my $10 they directed my down a muddy path and said- oh hey be careful it’s slick. I made it town the small hill went to turn the bike to park it and the mud got me- I made an amazing entrance and down I went. The guys came over and helped my pick up my poor scooter, what a nice introduction that was.

Jason was the first person I saw with the Lane Splitters tee shirt on- I was super stoked! When you hear that your shits will be shipped all over the world and the USA it is a great feeling, but to see someone in Texas with that tee shirt on made me so happy! Immediately I started meeting so many wonderful people and talks of tattoo’s motorcycles and everything else in between started flowing. The Backwoods Saloon has a food truck outside and you can order beverages inside from all the nice bartenders. They serve drink orders in a Backwood’s Saloon custom koozie, a really nice touch!

There was a huge campfire that had been built out back by the tents. When we first set up I had a scene a couch sitting on the edge. I assumed that it was to sit on by the fire. We were sitting in the bar which had fairly large windows that looked over the alligator pond. Jason looks out and says something like oh wow that fire is huge and we both commented on how early the fire was lit. We headed out back to the fire, people were riding a couple mini bikes around. We had just missed the most epic jump through this three story building high fire, we saw pictures and video and the dudes whole face and arm were engulfed in flames. I guess a wood pallet was sticking up and it caught his leg and impaired his landing and he broke his ankle, and the couch I spoke of earlier ended up IN the fire, only springs were left and some creepy blue purple flames burning some kind of couch chemicals.

With the fire fading and the night started creeping into early morning we all turned into our tents. Rumors of rain and looking at the weather radar were the nights ending conversation. When I woke up the next morning- the rain was still the main topic of conversation. It was supposed to hit at 9 am- so I packed up my tent and stowed it into the saddle bags hoping it would dry out and I would possibly camp Sunday night as well.

Walking around and the show was starting to come alive even at 9 am. The Bucking Pig BBQ was there- OMG their food is FIRE! They had the most delicious smoked sausage breakfast tacos ever. They also had smoked meat on a Chocolate Doughnut ( I wanted it so bad but did not give in ug I wish I had one bite though). Flash tatoo’s were going down in the bar by Don Shapiro. Live bands were on stage with amazing music!

I was so happy that DeathHawk cycle were selling rain jackets, not only did they look cool but they also served a purpose. All the vendors there were so rad, Cheap Thrills and Chemical Candy were there as well as their choppers on display. Knives Made by Nick- was out there as well. First of all if you guys do not follow him on IG- you better go and do it now. Not only is he a really cool person, his knives are amazing. He had many knives on display but he really loves custom making a knife just for YOU! MC shop Tee’s were there of course too! The main reason we came out and man the best people ever are Danger Dan and his beautiful wife! It just goes to show if you invest in your local motorcycle community and have a vision and a focus what it can do and grow into.

I am not going to go too much into the rain- in my opinion it was not much of a factor. To me at these events- just like at Corn Free the rain makes it that much more fun! Was I bummed that I didn’t get to go on a ride on Sunday and see more of Texas- yes! But that is the beauty, everyone that was at the show all came because they wanted to be there- it was a priority. On the other hand though- you all motherfuckers were kinda stuck there for hours until it cleared slightly. Hearing peoples tales of what they rode through to get to the show- well I love hearing stories from the road, and for me that is what made the event special!

Texas now has a special place in my heart. The welcome to Texas sign reads “Drive friendly-the Texas way. I never thought much of it, but let me tell you hands down the nicest people in any state that I have been to! I was really touched at how kind everyone was to this girl from Arizona! I will be back in 2019 for this one- it tends to be the same weekend in November so everyone mark your calendars! 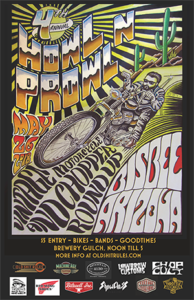 The Howl ʻN Prow is put on by “Old Shit Rules” Sam and Tiny. The show is in Bisbee, Az. which is situated in southern Arizona right on the boarder of Mexico. This show is a choppers only motorcycle show for bikes that are 1984 and down OR any year chopper that is hand built. There are only 80 spots open for entries to the show. It is a cash only show for entry, drinks, raffle tickets or merchandise.

This year the show was held on May 26 which was a Saturday. The original plan was to meet with a friend at Lane Splitters Garage in downtown Phoenix at 8am and ride down. But with motorcycles, we all know how plans can change rather quickly. At 1 AM I check my messages and my friends bike is down with zero hopes of getting it road ready for the 450 mile round trip from Phoenix. Late night text to some friends and some people decided “Eff it– why not leave on a whim Friday night.” I text my friend Tom who is leaving Saturday at 5 AM. I hit the sack for a nap and luckily Tom woke up and saw my message to meet them at 6 AM at Wildhorse Pass.

The weather in Arizona can be tricky in May, it is already on the verge of getting disgustingly hot, but not this day. The early morning weather was crisp and clean and had the feel like it could rain, something we desperately needed in the desert. The clouds made for an awesome show for the trip down south along with the desert scenery. Our 214 mile journey was about to begin, with full tanks of gas myself, Tom and Oscar started our trek down south.

We felt like we made it to Tucson in record time, as Tom got off his bike he was laughing at how fast the 116 miles from Phoenix to Tucson took us. A quick stop for more gas for our small tanks and some hydration we made our way to Tombstone, AZ for breakfast. An absolute gorgeous ride through the southern stretches of Arizona and weaving in and out of small towns and two lane roads made you realize why you live in Arizona. As we pulled into the town of Tombstone, you are transported back in time with dirt roads, horse drawn stage coaches and people on motorcycles dressed up like Bandoleros. Some window shopping and a bite to eat to kill some time before the show and we were ready to roll, a short 27 miles through long sweeping curves into the old historic town of Bisbee, AZ.

Pulling into Bisbee and off the main road to ride the small side street to “The Gulch” you can see all the cool choppers and bikes lining the street. We get directed by one of the patrons to turn up the hill to a small lot. A walk up a very steep flight of stairs into the event and it is chopper heaven! Row after row of beautifully crafted machines, friends standing around talking about motorcycles, beautiful scenery and music. The winner of the best chopper goes home with an orange helmet and that helmet comes back to the show every year.

The best part of the show is at the end Naco Chris hosts a kick ass campout! His place is right on the boarder of Mexico and you can see the boarder wall fence from his backyard. He had food trucks there as well as a hand built mini bike track! There were trips to the boarder for tacos and fun chopper shenanigans. The hospitality by Naco Chris was like no other!

If you missed this years Holw ʻN Prowl it is a show to write in the books for next year! We hope to see you there. Until then… keep it twisted!!

Due to the nature of our business (Rallies, Runs, Races, Shows, etc.) our shop hours regularly change. Subscribe to our email list, stay tuned to our social media pages (i.e. Facebook, Instagram, Twitter) or Call the shop for up to date information.